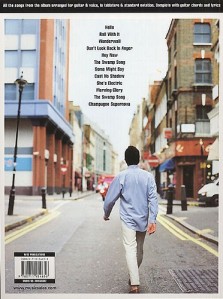 Twenty years have passed since the release of the second album from Manchester band Oasis.

There will always be a debate on which album was better – this or “Definitely Maybe”. Whatever camp you’re in it is difficult to deny that both albums breathed life into British rock music and created a legacy that so many have attempted to emulate since.

Morning Glory begins with “Hello”. This song actually sees Gary Glitter named as one of the songwriters due to the band using a sample of his song “Hello, i’m back again” which knowing comes from the mouth of Glitter is a little unsettling!

“Roll With It” was one of the big singles from the album and famously went up against Blur and their track “Country House” for the number one spot in the UK which Blur ended up winning. This track tries to really speak to an Oasis fans who are a bit like football supporters to me – its an anthem.

The albums big song follows next. “Wonderwall” is pretty much the ultimate Oasis track. This is not because it is the best Oasis song (far from it) and I am sure hardcore Oasis fans will think it’s ‘shit’. But in terms of a song being so synonymous with a band then this one is surely it.

There are a number of interpretations of the song’s meaning. It seems to have even changed from the perspective of Noel Gallagher. I like to think the song is about either a strong friendship or of course a simple love story.

Many a pub or bar will have seen “Don’t Look Back in anger” sung at the end of a night. This is one where all the lads will be standing in a circle, beer in one hand, arm around their mate as they bellow “Soooo Sally can wait…”.   20 years on and whenever I hear this song it sounds as fresh as it ever did. I like it but then I prefer Noel’s voice to Liams.

“Hey Now” is overly long and isn’t half as exciting as the 45 second instrumental “Swamp Song” that follows. It was such a shame that was so short and you could just keep going with that rift.

“Some Might Say” never did much for me but it is the most positive song on the album with the message clear:

“Some might say we will find a brighter day”

“Cast No Shadow” is Oasis at their finest. It’s a superb son with Liam sounding soft and melancholy as he is backed by Noel throughout. It is like a brother being comforted as he is telling a story which I find a little difficult to interpret. Sometimes I believe the song is about a mans suicide but it could be less morbid and be about a man living his life in a way he doesn’t wish to.

“She’s Electric” is the most fun song on the album by far. It is one of those tracks that when you hear it you want to smile a little. It’s uplifting, not anything like many of the other moody Oasis songs. Whilst the tone of the song is in no way dour the lyrics tell a tale of a girl who he finds “electric” and he spills his happy feelings about her but the line that changes all that is:

“She’s got a bun in the oven

But’s nothing to do with me”

There seems no sadness when he is saying this. It’s a very casual reaction to essentially a causal song

The title track is next. I love this song. “Morning Glory” is loud, big and ballsy. It never fails to get my head moving as I bellow out the first line “All your dreams are made…”

Whilst the most uninteresting second part of the “Swamp Song” joins us for another 40 second are so we are then treated to the albums final track “Champagne Supernova”. It’s one of those tracks to put on when you’ve come in from a hard night partying. Lyrically it’s a mess and i’m not sure Noel Gallagher knew what he was on about when he was writing it:

“Slowly walking down the hall, faster than a cannonball”

I can overlook many things, but that is fucking nonsense.

Whilst there are some confusing lyrics it can’t be said that Oasis didn’t make a timeless album here because 20 years on, listening to this again remains so much better than most of the UK based Indie music I hear today.