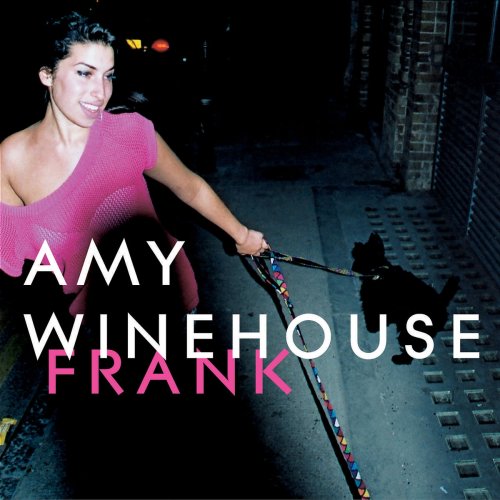 North London born Singer Songwriter Amy Winehouse saw mainstream success with her second album “Back To Black” but it was her first venture “Frank” which saw her arrive on the scene with a unique style which would have the critics salivating.

“Frank” introduces us to the quirky jazz singing style of Winehouse. Her Jazz voice against Hip Hop-esq instrumentation makes for compelling listening. Her songwriting has depth and also is actually very funny. The humor in some of her lyrics can be missed on first listen but when you break down what she is actually saying it is brash, sarcastic and witty.

Kicking off the album is “Stronger Than Me“. This track is a confident Winehouse (nothing like you hear on “Back to Black”) who is pulling apart her mans character. She is conveying to him just how weak he is and that he should be a lot stronger than her in this relationship.

“Don’t you know you supposed to be the man,
Not pale in comparison to who you think I am”

It is a song that feels as though it is the final speech before a break up and she is explaining the reasons why she needs to get away from this man.

“All I need is for my man to live up to his role,
Always wanna talk it through – I’m ok,
Always have to comfort you every day,
But that’s what I need you to do – are you gay?”

You Sent Me Flying is a really wonderful song. Winehouse knows how to set a scene and the way in this song she reacts to being dumped is absorbing. It really feels as though she is reviewing the whole situation and that by writing this song it is in someway helping her to deal with her feelings.

“And although he’s nothing in the scheme of my years
It just serves to bludgeon my futile tears
And I’m not use to this, no, no; I observe, yeah, I don’t chase
So now I sit with consequences, thrust in my face”

Tagged onto the end of this song but without changing track is “Cherry”. Cherry is the name Winehouse gives to her guitar and she sings how this guitar is the replacement for a man.

“Know you now” is a song about a man Winehouse likes but believes he is too egotistical. She feels in control of the situation and whilst it’s clear she has a bit of a crush on this individual, she just doesn’t believe that the personality on display is actually what he is really like.

“Oh, I’m not ruling you out
I’m just in doubt as to what you say you’re all about, yeah”

“Fuck Me Pumps” is hilarious. The song is about Women who dresses in a  provocative manner and simply go out to bag themselves a man. They are looking not for love but for money, fame and fortune. (Slags is what i’m saying)

Cuz you all look the same,
Everyone knows your name,
And that’s your whole claim to fame.

“He could be your whole life,
If you got past one night,
But that part never goes right.”

and the extremely bitchy:

“Don’t be too upset,
If they call you a skank,
Cuz like the news everyday you get pressed.”

“Fuck Me Pumps“ is Winehouse at her absolutely best. It’s an assassination of the type of character we have all see much of over the years.

Track 5 is “I Heard Love Is Blind”. This is Amy Winehouse explaining why her sleeping with another man was not actually cheating as the man in question looked like her current boyfriend.

“But you can still trust me, this ain’t infidelity
It’s not cheating; you were on my mind

Yes he looked like you
But I heard love is blind…”

On track 6 she delivers a cover of the American Jazz Standard ” Moody’s Move For Love”. Her version is backed by a Reggae tune which makes the whole thing a little sickly smooth.

She hits the Jazz standards again on track 7 with “There Is No Greater Love”. Sounding like Ella Fitzgerald I think this is a great rendition and perfectly timed at just over 2 minutes.

“In My Bed” is produced by Salaam Remi and the tune used is the exact same as on the song “Made You Look” from rapper Nas which was also produced by Remi.

The song is about having sex with an ex but there is no feeling involved other than the sexual act. I find this song a tad monotonous and lyrically a little hollow given the emotion she has shown on previous tracks.

“Take The Box” is the best song on “Frank” by a long way. It is probably the best thing Winehouse has ever written and I include “Love is a losing game” from the following album.

The song is about getting rid of her lover who she has found out to be cheating. The term ‘take the box’ is quite literal in the sense that she wants him to take away the box of all the gifts and memories she has from him.

It is a beautiful song and was worth buying the album for alone.

“October Song” is actually the tale of a canary that Winehouse used to have but died. Winehouse wrote this pleasant Minnie Riperton sounding ditty about the doomed pet.

“What is it about men” is probably the most direct title on the album. There is little need for explanation or interpretation of the point of the song. I’m not really fan of it melodically and one of the few tracks on this album that I get bored by.

“Help Yourself” has similar themes to “Stronger Than Me” in the sense that Winehouse is feeling intellectually superior to her man and is asking him to essentially get his act together because she is not his life to simply pick him up all the time.

The track that closes the album is “Amy Amy Amy”. The start of the song sounds as though someone will start singing “It ain’t what you do its the way that you do it”.

This track sees Winehouse dealing with flirtations in what you would call sexiest song on the Album. It sees her fantasizing and making sure he knows that she is interested. She knows it may be all morally wrong, but she’s comfortable with it.

Overall “Frank” is a really enjoyable album from a strong female voice. It has emotion but isn’t depressing. The ability to laugh at herself an deal with the situations she is in is refreshing. She isn’t a victim, she is a participant.

This Amy Winehouse seemed hopeful whereas on the next album that hope seems to have drained away. She didn’t write songs to please, she wrote songs as a diary. And you can track where she is at in her mind throughout her two albums.

It is a travesty that we will never get a third.