In March of 1992 female vocal group En Vogue released their follow up to their debut album “Born To Sing”. “Funky Divas” went on to sell 5 million copies worldwide and here in 2017 has just received a vinyl re-release which I am very pleased to be listening to as I review this album.

What was one of the fantastic things about En Vogue is that whilst these four women Terry Ellis, Dawn Robinson, Maxine Jones and Cindy Herron were fine looking women they were not releasing material to simply appease our eyes but the ears were the focus – this group could sing. No one was carried and on “Funky Divas” we are treated to tight harmonies, sumptuous tone, and a soulful sound which is magic. 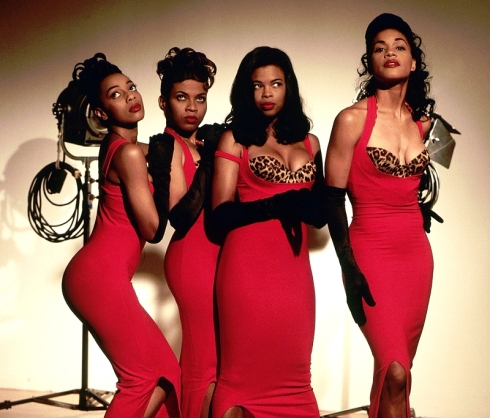 The opening track “This Is Your Life” is an ultimate opening track with the audio being the girls getting ready to go out on stage and as they do the track starts as if we were listening to a live performance. Whilst the production and music style may sound of as time I personally love the new jack swing programmed drum sound.

If you are going to include the word “funky” in the title of the album then it needs to deliver, especially on the opening track and that it does. This is a cracking song and the harmonies on the chorus are just delicious.

“My Lovin (You’re Never Gonna Get It”) is arguably their most famous song (along with ‘Don’t Let Go’ from the following album).

This is where the ‘Diva’ part of the title comes into fruition. This song is funky with big attitude and remains one of the best R&B songs to come out of the 90’s. It’s big on female empowerment and taking back control ensure the man knows that he will never have a chance with this woman. The breakdown part of the song is wonderful because it is actually taunting this man as these females unite to show their strength.

The 3rd track “Hip Hop Lover” probably suffers more than any other track on the album from its dated sound. Not that this is a big problem as the album is from 1992 and the early hip hop production isn’t exactly an unappealing sign. This song really just suffers from not being as strong as the others melodically and the similarities in instrumentation to other songs of the time is too evident.

“Free Your Mind” is a departure from anything we have heard up to this point. It’s a rock song where our girls have turned their attitude up about ten notches. Telling the world that because they wear high heels doesn’t make them a prostitute really show them going on the attack at the perceptions of women in all walks of life.

This song is strong in both instrumentation and vocal approach. The vocals are higher pitched and they genuinely sound angry. Brilliantly executed and an anthem for everyone who might think they don’t belong.

On the 5th track the wailing guitar is still evident early on as the song moves into a more of a slower funky groove. “Desire” is leaning more towards the sexier side of R&B with a background saxophone intermittently present in the background. This song has a potent groove which you can get lost in.

“Giving Him Something He Can Feel” is a song orginally performed by Aretha Franklin and written by Curtis Mayfield. Lead vocals come from Dawn Robinson on this cover as En Vogue take the whole thing to church. This might be a cover version but the vocal from Robinson is a wonder to behold and she takes the song into a soulful heaven.

The production is my only criticism because it sounds too synthetic when production from the time when the song was written would have been big live horns and instruments that would carry the song through.

Regardless of that, what this track does is offer more diversity to this highly enjoyable album.

As I turn the vinyl for the second half of the album I am met with the seventh track “It Ain’t Over Till The Fat Lady Sings” and by God I love this track.

The majority of the song is a rap but the content of the rap is important because it addresses the fact the the music industry was more interested in lip syncing as singing became just entertainment En Vogue were prepared to take that and show the world that singers are still what it is all about and this song is perfect in it’s goal of getting this across.

“Give It Up, Turn It Loose” starts with the girls attempting to sing “Yesterday” by the Beatles but a beat kicks in and we move into one of the best songs on the album. This song sounds so fresh even here in 2017. It’s got a positive melodic structure that has En Vogue sounding so upbeat and defiant. It’s a song about working through problems and getting to the other side of these problems (such as a man) without life being over.

Track 9 sees the girls go back to “Yesterday” and give a soulful rendition of the Beatles track. Not particularly a fan of Beatles’ covers and this doesn’t do much to dissuade me of that opinion as there is something about this cover which misses the sentiment of the original. Avoid.

“Hooked On Your Love” is another cover and the second song on the album which was written by Curtis Mayfield and performed by Aretha Franklin. This cover is much nicer than the previous track and they sound excellent. Production wise the instruments again sound a little synthetic especially the synth horns that are on display. The production doesn’t do the vocals justice.

“Love Don’t Love You” is another funky number which is top quality again. All songs on the album are produced by the men behind En Vogue Denzil Foster and Thomas McElroy and they have written all the lyrics apart from the covers.

The really nail the production on this track and whilst all props have to go to the girls for their talent the men behind them are just as important.

“What Is Love” is full of that gospel infused positivity that the early 90’s gave us with groups like “Sound of blackness”. This is on the same vibe and the girls sing with such grace as if they have been placed here by an higher power. If you want to hear R&B music with top class female vocalists then you have it all here on this song.

The final track is just 38 seconds long and is called “Thanks/Prayer” where the girls show their devotion to their faith as they thank God for their success.

Like a lot of R&B/Hip Hop singers and groups of the time the lines between Sexual liberation and faith were often at odds with one another but artists such as En Vogue were able to tow the line between the two and ensure that respect for their faith and ultimately their upbringings is not forgotten.

“Funky Divas” is a wonderful album showcasing four exceptional female voices and two men in McElroy & Foster who were able to direct their talent into a multi million selling album.