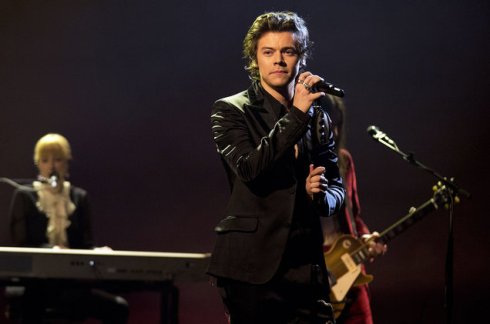 Million selling pop group One Direction disbanded in 2016 with many of the members tipped to go onto have solo careers. Whilst Niall Horan and Zayn Malik have had moderate success the anticipation was that the most prominent and talked about member Harry Styles would be the one to really break out.

Whilst it has been a long time coming Styles released his self titled debut in May 2017 and it has certainly made a lot of people sit up and take notice including myself who probably unfairly dismissed a released by a former One Direction member as pop fodder.

But pop fodder this is not though perhaps it is too obvious with it’s influences and style which fail to really delve into the personality of Styles and leaves me wondering whether he is trying to appease, copy or just display the influences that have been going through his mind in his life.

The album is mainly soft rock and quite middle of the road. Taken on their own merit there are some very nice tracks but when compiled onto one sitting it can be a little difficult to digest as it never really gets out of second gear.

The opening track “Meet Me In The Hallway” is a beautifully atmospheric way to start the album. The echoy vocals sounds distant and lonely as Styles begs for someone to return to him despite the pain that they have caused him. It’s not a powerful opener but one that sets the tone for this debut perfectly.

Track 2 is the lead single and centerpiece of the entire project. “Sign Of The Times” is a mesmerizing powerful ballad which is big in it’s sound and is equally infectious.

This is a real grown ups song. The David Bowie influence is more than apparent with the 90’s Indie Rock touch also clearly eveident. It almost sounds like a lost song from that era and whilst I really like the track there is a bit of credibility lost when you realise the song has SIX writers. The way he is trying to portray himself is like a new Paul McCartney but Styles is just a tag on as a songwriter and has played nothing himself.

Now this doesn’t normally bother me but there is multiple singer song writers out there who do not have the budget and hype machine to enjoy so many songwriters at their disposal. This album has been created to make Styles seem like the second coming of pop music bringing back that rock edge but when you realise how contrived the whole thing is I feel I am being sold something that really isn’t real.

“Sign Of The Times” is a great song though despite my reservations about it’s genuine credibility.

“Carolina” has much more personality than just about any of the tracks on the album with it’s 70’s style Calafornia breezy feel. It is one of those songs that you feel you have heard before but remains enjoyable. The instrumentation is slick and varied. The layered vocals worked and it’s overall a catchy affair. Six songwriters again mind you.

“Two Ghosts” again is a nice track. This album IS nice. It’s all very pretty, slick and nice.

But it’s all a little forgettable and that is where it suffers because the moment you hear this track you’ll forget it within 30 seconds. Try it.

“Sweet Creature” sounds like Styles has been having a chat with Ed Sheeran. It’s not as sickly sweet as a Sheeran track but it’s not far away. This song isn’t forgetable and one of the strongest on the album in my opinion. His vocal is more exposed and out there for the listener to get to grips with his tone which is at times a little over produced.

The country/folk vibe is brought to the forefront on this track which is a world away from the One Direction days.

An ethereal opening sees track 6 “Only Angel” burst into life as Styles turns into the rock star we have been waiting for up to this point. The Rolling Stones comparison will be rolled out but on it’s own merit this is a solid track which shows more edge than most of the songs included on this debut set.

There are elements of “Don’t Bring Me Down” by Electric Light Orchestra during the chorus as Styles continues to grab from others.

“Kiwi” is an nod to the Arctic Monkeys and the rockiest song on the album and the lyrics are written entirely by Styles which is an improvement. What we see on this track is more of what we expected Styles to churn out, even when he was in One Direction.

This song suits his style and image and deals with fame and how people react to him. It’s loud and boisterous which is what I expected a Harry Styles album to be.

“Ever Since New York” is catchy and sounds like another honest song about his experiences in a relationship and how this shapes him moving forward.

“Woman” is actually a track I quite like. It doesn’t feel as saturated by the guitar as some of the other tracks and this mid tempo track though simple and predictable in it’s composition is one I enjoyed from the first listen. The Arctic Monkey’s “AM” era vibe is noticeable too.

“From The Dining Table” is the final track. It’s a very sombre song about seeing your ex with their new partner. It’s sad lyrics see Styles take on a different tone in his vocal. The instrumentation is simple and allows the lyrics to come to the forefront. Its a nice track and fits in with the style of the album which in itself is sombre and retrospective.

Overall it is certainly an interesting debut album from Harry Styles yet it’s lack of memorable tracks will see it spawn few chart hits but then I think he is looking to become and album artists and gain a reputation for bringing out a higher quality of album.

I am not entirely convinced this IS him and whilst I am sure he is influenced by the likes of the Beatles, The Rolling Stones etc I have to ask – who isn’t?

It’s not a safe album in the sense that it will appeal to the One Direction fans but it is a safe album in the sense that it doesn’t take any real risks. It picks a Folky Rock genre to follow and it stick to the plan. I don’t hear much emotion in his voice and at times when you are simply singing other peoples songs (okay he gets a credit on all the ones that have FIVE other writers) the connection may be a little lost.

A good listen and it will be interesting to see the direction he goes in moving forward.