Posted on November 22, 2016 by Xtal Posted in Uncategorized 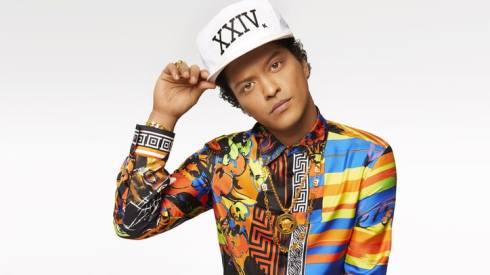 2016 saw the release of the 3rd studio album from American Singer/Songwriter Bruno Mars.

It had been four years since an album of new material had been released but in this time he collaborated with Mark Ronson on the smash hit “Uptown Funk”. This particular track was a throwback to 70’s funk/soul music which Mars has kept in line with on this 9 track project “24k Magic”.

This album can be seen as indulgent but for someone like myself who enjoys the sounds of funk music, late 80’s and early 90’s R&B this whole set is a particular treat.

Soul music and good quality R&B is not something you find much of in the charts. I recently reviewed an album by the artist Gallant and found his particular style refreshing despite it not going to be a commercial chart success.

Mars already has the crossover appeal so on his third album is able to do something that he wants to do. There is no question that Bruno Mars has created the album he wanted and there are no accidents with this.

The opener is the title track “24K Magic”. It is not often I hear a song and love it on first listen but this is just such an infectious and fun pop song that it puts the rest of the charts to shame.

Lyrically it may be a little shallow and hold little meaning other than to brag but musically the song is just so well put together. I defy you not to be singing along after a couple of listens whether you like it or not.

I love the song and is one of the best singles I have heard by anyone in 2016. The confidence Mars is now exhibiting is a long way from the fragile singer we heard on his first album on songs such as “Just the way you are” or “Grenade”.

“24k Magic” may be a throwback and influences from the 1980’s funk and electro scene but the way it is crafted ensures it sounds fresh and contemporary.

“Chunky” is a little more downbeat but keeps the funk going. This is probably my favourite song on the album and although there are similarities to the track “Treasure” from his 2nd album “Unorthodox Jukebox” it still has enough differences to make it a top track.

I would think Mars will end up releasing this as a single as it is radio friendly with more slick production. It’s another fun track and I say fun because that is what Bruno Mars is doing at the moment – he is having fun with his music and producing tracks that give off so many positive vibes.

“Perm” is almost a James Brown tribute. It also sounds very similar to a track on the album “Uptown Special” by Mark Ronson called “Feels Right” which Mars actually co wrote. It’s not singing, its not rapping, its chanting over a uptempo funky soul beat.

The lyrics are a bit ridiculous but I believe he is setting out to just be playful with his manner towards women coming to the dancefloor who are looking good to him. It’s all a bit tongue in cheek.

“That’s What I Like” is the first time we hear him do a straight up R&B song on the album and in my opinion he doesn’t miss on this one either. Mars vocally uses a number of styles he has in his locker. Slowing it down, hitting the high notes, and singing with that sexy soul voice he can also manage to pull off.

One of the highlights of the album is track 5 – “Versace On The Floor”. It takes a little bit of time to get into and you can be forgiven for thinking that Michael Jackson is back from the dead and creating music again as the influences are crystal clear. Once the track really kicks in just past the minute mark we have this early 90’s Babyface style production.

The song is one of the more sincere songs lyrically despite him singing about taking a girls clothes off and having second. This song is so out of the realm of anything that is about in popular music at the moment. It’s almost bordering on being ‘dated’ and  you are trying to work out the sample only to find that there isn’t any.

“Straight Up & Down” keeps with the 90’s R&B/New Jack Swing vibe. After hearing the title track I didn’t think that this is the direction he would be going in but he really kills it on this track. He is doing what other artists would love to be able to do but can’t for fear of being labelled as dated.

“Calling All My Lovelies” is another track where Mars has transported himself back to a time and siphoned off the best bits, removing the fat and giving us a song that is so smooth you want to reach out and touch it. Vocally he is again wonderful as he uses the richness in his delivery to deliver a quite brilliant track.

Lyrically he again shows and example of how he has changed and how fame has altered his perception in relationships (and not for the better) as he tells this girl that he has too many women waiting for him and she cannot ignore him for much longer.

“Finesse” is another New Jack Swing nod. The comparisons to Bel Biv Devoe “Poison” are so obvious that there may even be a lawsuit coming. But I love “Poison” so I am going to love this. Actually it sounds more like R Kelly “I Like the crotch on you” from “12 Play”.

Maybe I shouldn’t just be making comparisons but after the Gap Band ended up having a writing credit on “Uptown Funk”, Marvin Gaye’s family won a court battle against Robin Thicke & Pharrell for “Blurred Lines” and Tom Petty took a chunk out of Sam Smith’s “Stay With Me” profit you would think they would be less open to such accusations.

The final song on this short album (33 minutes) is “Too Good To Say Goodbye”. If you’re going to be doing some 90’s influenced 90’s R&B then getting ‘Babyface’ to co-write a track is the exact thing you want to be doing.

Whilst many of the songs on the album have been about swag and sex this track is the most sentimental. This is a straight up love song as Mars sings directly to this woman who he doesn’t want to break up with for any reason. He has a knack of conveying this unconditional love which he shows a vulnerability in his vocal.

Musically I really have enjoyed the instrumentation on this album. For an R&B album it really stands out musically with a slick production and layered drums and brass sections.

My opinion of this album is likely to be biased given that my musical tendencies are towards the same influences that Mars has taken from. I love Soul music. I love funk music. I love New jack swing.

Having not been interested in Bruno Mars on his debut album since he released the single “Locked Out Of Heaven” I have been eagerly anticipating each release. He is making great music and doing something that no one else is doing.

People may criticise and say he is just recycling what has come before and he clearly makes no apologies or tries to hide his influences on each track but he is still making fresh music in my opinion and I absolutely loved this album.