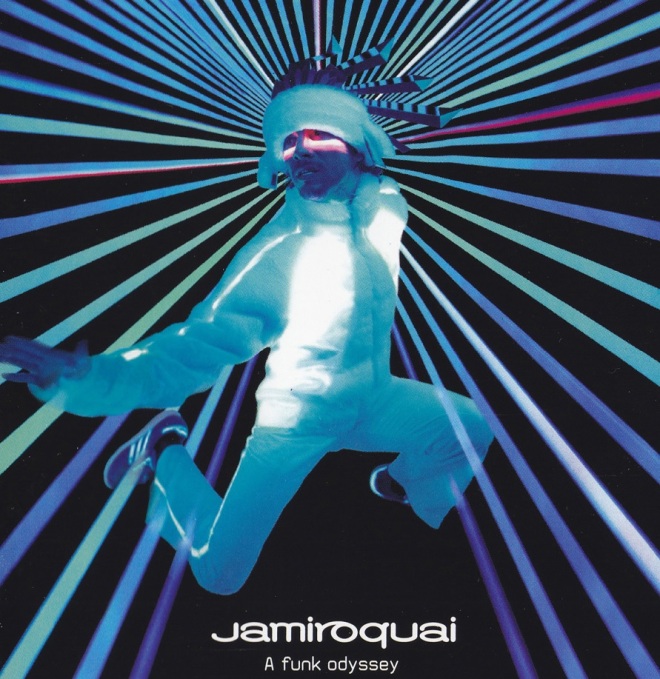 Posted on February 22, 2017 by Xtal Posted in Uncategorized

Jamiroquai released their 5th album “A Funk Odyssey” in 2001 with two years having passed since the bands previous effort Synkronized – Jamiroquai (1999).

The previous album was a mixed bag which never really flowed in the way an album needs to so it is no surprise that “A Funk Odyssey” is more cohesive in it’s themes and overall mood.

There is a positivity in Jay Kay’s writing on this project when things had taken a more darker turn on “Synkronized”. This album though marks a complete change in sound and style from the Jamiroquai we heard on the first three albums.

Whilst the album is called “A Funk Odyssey” the funk is more electronic and synth pop in it’s instrumentation. It isn’t a perfect album but it does have some excellently contrasted tracks with some being firm Jamiroquai classics.

The first track “Feels So Good” quickly gives us a different mood with a intergalactic vibe portrayed with the spaceship sound effects in opening moments. The pounding bassline kicks in with the funky guitar staying in a repetitive tone for the verses. The song is a great departure from the Acid Jazz sound Jamiroquai were known for in the early 90’s but still sounds very much like their style.

Whilst Jamiroquai was probably always about singer and songwriter Jay Kay this album was more him than any of them because so many of the band members had left with him taking complete control over the sound. 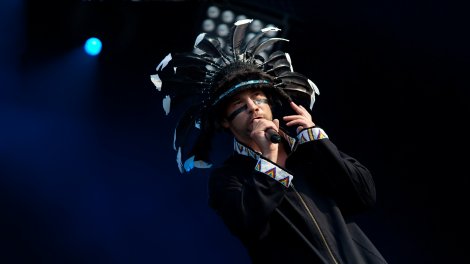 “Little L” is a song about his relationship with British entertainer Denise Van Outen in one of the more personal tracks on the album. On the previous project the track “King For A Day” was about former band member Stuart Zender and whilst this song is completely different in style there is the same air of bitterness and self righteousness that we saw on that song.

But “Little L” is more than just a slagging match with an ex. It is the biggest song on this album. It’s not that it was the highest charting song off “A Funk Odyssey” but it’s a real catchy one. The production is extremely slick with the Disco vibes never so apparent in a Jamiroquai song. It channels the 70s Disco Chic essence and you could have had Nile Rodgers playing his trademark Guitar on this one.

The disco funk carries through to the 3rd song “You Give Me Something”. I always enjoyed this track as it wasn’t as in your face as “Little L” or “Love Foolosphy” although it has just a catchy chorus as both of them. The song is quite standard in it’s composition and lyrically it offers nothing new but a nice love song.

A change up at this point is required and we get this change with one of the most unique Jamiroquai songs “Corner Of The Earth”. As a big fan of Jamiroquai this song is an important marker because in 1993 on the very first track “When You Gonna Learn” you realise now where Jay Kay’s head was and what he was passionate about and with “Corner Of Earth” you again get a sense of where his head is at.

This song belies the album title as it is a very chilled out song (when you get through the opening 25 seconds of Asian style horns and drums) with Kay attempting to sing softly for the most part. Once the chorus hits the vocal sounds better as it is layered and sounds fuller.

When I first listened to this album in 2001 I was never over awed by “Corner Of The Earth” but I remember a few years ago hearing it again and realising what a great track it is. It isn’t one for those looked for a “Cosmic Girl” or a “Canned Heat” but it still is a great piece of music with a retrospective look at life and self fulfillment.

“Love Foolosphy” is one of those tracks which is just perfectly constructed to be a Jamiroquai song. It’s hard to explain in detail but the whole sounds and structure is in sync with the type of music Kay wishes to produce. I think if this song had been released as the first single it would have been a bigger hit but it still remains a track regularly heard on radio in the UK.

I would say that “Love Foolosphy” retains a funkiness but not the spacey and moody funk that were apparent on the opening three tracks. It’s a feel good pop song, easy to sing along to and here in 2017 it sounds extremely fresh.

“Stop Don’t Panic” is a poor attempt at a more rock/funk sound which Jamiroquai have flirted with over the years. But this song in all honesty is just boring. It quickly dies out when the opening guitar rift sounds as if we are going to get something exciting but melodically it is extremely drab and forgettable.

“Black Crow” is a slow burner but at the 1.50 mark the instrumentation kicks in for this chilled out look at the world which Kay is using the ‘black crow’ to help make sense of the world. This song may not be everyone’s cup of tea but when the song is allowed to flow for those final couple of minutes the result is satisfying.

“Main Vein” is without a doubt my favourite song on the album. Jamiroquai have never up to this point enlisted the help of any other artist but UK singer Beverly Knight lends her powerful vocals for some backing wails which sound terrific.

Lyrically the song is about Kay’s ailing relationship with the UK press which had seen him get into fights and generally lose the plot. But this song is a great way hit back as it’s absolutely brilliant. In fact I would go as far to say that it is the only brilliant track on “A Funk Odyssey”. It’s upbeat, funky, perhaps a little too synthetic in some of the instrumentation with the drums and the synthesized horns but it still has a great feel.

“Twenty Zero One” tries to go on the same path as “Stop Don’t Panic” and whilst it doesn’t fair much better it is certainly an improvement. The improvement comes from the music more so than the distorted vocals from Kay who like on “Black Crow” is looking at the world from the perspective of someone or something else.

Kay has always felt a need to comment on the state of the world and throw caution to the way things are progressing (like on “Virtual Insanity”) and he again delves into this subject on this track.

The final track on “A Funk Odyssey” isn’t a funk song at all but an acoustic number called “Picture Of My Life”. This song on reflection seems very personal with Kay basically questioning how something so good (his career as the main man of Jamiroquai) has become something that effectively has created a monster that he is the embodiment of.

What is important at the end of this song that if you just hang on for a minute you will get a bonus track “Feels So Good To Be Real” which just takes the edge off that downbeat ending you just received. The track was all done in one take and it just sounds like Jamiroquai are having fun Jamming which in end is what it is all about – And it does feel good to be real.

“A Funk Odyssey” is far from perfect but is an album which I believe shapes the next two Jamiroquai albums as Jay Kay has found a sound he wishes to go forward with. We are well away from “Emergency On Planet Earth” but there is still an essence of Funk and Soul which Jamiroquai were always based upon.