Posted on March 27, 2017 by Xtal Posted in Uncategorized

In 1991 Prince released his 13th studio album and the first to feature his backing band The New Power Generation”.

With the 90’s kicking the sound on this album at points is very much of a time with those industrial sounding drum machines a prominent feature but when Prince gets a hold of any style of music and does his funky rock thing you know you will get something slightly different.

Whilst this album is not considered one of the best from Prince I can’t deny that I love it and I do so because it has some of my favourite Prince songs included with two songs of this project being in my top 10 Prince songs.

At the time of release Prince may have been seen as trying to appease the mainstream and adapt to the new music styles such as hip hop and New Jack Swing that was dominating the American charts. In retrospect I believe Prince has just embraced these new ideas and put his own spin on things resulting in something that is very Prince.

On this album he is almost a band leader with his new set of musicians the New Power Generation whilst not offering the cohesive and tight sound of the ‘Revolution’ bring a freshness to the table. 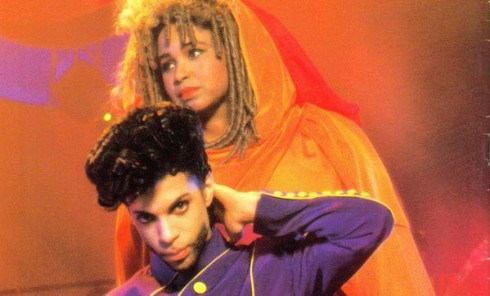 “Thunder” kicks off the album and begins it all with a bang. This track is massive as Prince leads his way through an anthem which is a glorious way to get things going.

Laced with religious phrasing this is an new jack swing funk bonanza where Prince is references his infamous epiphany which prevented him from released ‘The Black Album’ because of this drug induced hallucination.

Whilst a good opener at 05:45 this is track is far too long and is the length is not required as there is a point where you are just wait for it to end.

The 2nd track is “Daddy Pop” which follows the same musical styling as the opener with it’s drum machine a prominent force. With this track Prince is in the band leader mode as this funk frenzy powers through. This is where the New Power Revolution sound so fresh and funky you can get a sense of what he is trying to achieve with the new approach.

But then it really isn’t a new approach for Prince but more so taking what he does so well and mixing it with the musical sounds of the day.

I am not really feeling the rap on this particular track which is a bit messy and pointless when the track would have been just as good if it was allowed to play out.

After the manic beginning to the album things are slowed down with the title track “Diamonds & Pearls”. It is one of my favourite tracks by the Purple one and instantly catches my attention whenever it comes on.

The track though as much as I love Princes vocal is stole by band member Rosie Gaines. It is her voice and harmonies that make the track a special one. Lyrically the song is a simple love trumping the superficial things in life.

The melody, the vocals, the groove and the chorus make this song the killer track from the album and highly enjoyable to listen to.

“Cream” is a big song. It encapsulates everything Prince is about with a groove so smooth and slick it exudes a sexual nature with Prince’s voice offering a seduction as sexy as hell.

The use of the organ in the chorus is an interesting element as it gives this almost church like feel to the lyrics which are overtly sexual as Prince continues to blur the lines between religion and sex.

This is another fantastic track and has dated quite well compared to the sound of the first two tracks.

“Strollin'” is an example of how Prince just does what ever he wants and is in full creative control of his music because I cannot imagine many albums today being allowed to just put on the amount of diverse musical styles such as this particular track.

When you listen to this album in it’s entirety this track can make you think you may have gone onto something else as it’s just a very simple jazzy number. I think the track is a little misplaced and whilst Prince is trying to strip things down and you may find yourself clicking your fingers the song is ultimately a lot of nothing and goes nowhere.

“Willing and Able” is a better attempt at what he was going for with the gospel influences prevalent in the chorus with the call and response type style. Musically the song is simple with the vocals being the engaging thing about the track.

The rap verse outro hasn’t aged well and confused this gospel blues type song which makes it all a little forgettable.

The style changes up once more for the 7th track “Gett Off” which immediately hits you with it’s programmed drums and flute. Prince comes in with some superb vocals in this sex charged song about one night stands which sounds as superb today as it did then.

What I love about this song is that it is unapologetic. Prince goes to places with his lyrics that artists may stay away from. This song is one that showed that Prince was on the top of the game even though he had been around for such a long time even at this point. This is the purist example of an artists embracing the new sounds of the day and make it his own.

Prince was always an innovator and despite New Jack Swing with it’s hip hop influences already making waves Prince steps it up a gear with the brilliant “Gett Off”.

“Walk Don’t Walk” is the shortest song on the album and to me acts like a bridge to the next part of the project. The track is laden with a number of sound effects as Prince talks about not conforming and the empowerment we need to give ourselves.

The reason I say this track is like a bridge to the next bit of the album is due to the next song “Jughead”. I feel this song is like part of a live show where the band have gone off for a break only to come back on to re-introduce the whole thing again.

“Jughead” is what “Diamonds & Pearls” is all about. It a song with all the elements of instrumentation that Prince is known for. The song is a rap track with a big chorus that all sounds as if the song was done in one take in a big jamming session.

This song is funky and it surprises me that it was not a single given it’s great hook. Dated? Yes, but a track I love listening to and will get you in the mood for a night out without a doubt.

The 10th track is a piece of genius and a Prince song that never gets as much attention as it should because it is magnificent.

“Money Don’t Matter 2 Night” is in my top 10 Prince songs and probably sneaks into the top 5. It has every aspect of Prince I love from it’s deep lyrics, the soulful side of his voice, the groove with it’s simple bassline and the chorus to sing a long to at will.

The song has a political message too with lyrics like:

Hey now, maybe we can find a good reason
To send a child off to war
So what if we’re controllin’ all the oil,
Is it worth a child dying for? (is it worth it?)

What is also great about this song is that it could have been from any era. It is timeless and before I listened to this album I had no idea that it would have been included on a set from 1991 as it sounds as if it was done in the 00’s.

“Push” is so damn funky. Prince uses his famous falsetto to drive this song forward into the funkiest song we hear on this album. It loses it’s way around half way through and again is over 5 minutes long which is far too long.

Length becomes a problem on the final two tracks also which makes it all a little self indulgent.

“Insatiable” is one of the few quiet moments on the set with Prince breaking things down with a soulful groove. Comparisons to “Scandalous” from the Batman OST can be made but it doesn’t have the same atmosphere that track superbly created. (in what was the only highlight from that dreadful album).

But this is a good track and whilst it is far too long (over 6 minutes) this track was required on an album which up to this point you would consider a ‘loud’ affair. Again this track offers diversity and a chance for Prince to display all the elements of his musical styling.

The 13th and final track on”Diamonds and Pearls” is “Live For Love” which gives the album the rockier side of the funk Prince likes to create. This is where Prince and I usually part ways as being from a Soul/Funk/R&B background a track like this does little for my musical tastes and is why that the snobbier side of the Soul music scene dismiss Prince.

When people talk about Prince and the great albums they will rarely mention “Diamonds and Pearls” yet there are some of his best tracks included on this set. Yes at times it is a little messy as he stretches himself too thin in terms of all the musical styles he is trying to incorporate. When he get’s it right then it is a joy to behold in what is yet another fascinating album from one of the greatest.