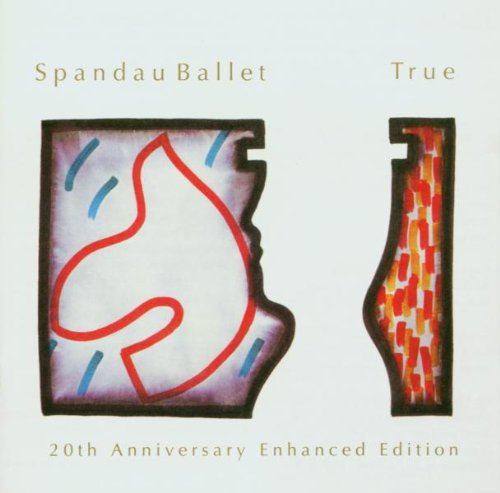 Posted on January 10, 2019 by Xtal Posted in Uncategorized

By 1983 Spandau Ballet had already garnered success in Europe with their first two albums “Journeys To Gold” (1981) and “Diamonds” (1982) but it was the release of their third effort “True” which turned the British band into global superstars spawning the two biggest singles in their career.

What this album did was take the band away from the Synth pop of tracks like “To Cut A Long Story Short” or the Jazz Funk of “Chant No.1” and move them into a safer direction of blue eyed soul with the distinctive voice of lead singer Tony Hadley made the centre of all things Spandau Ballet.

It isn’t a very long album with only 35 minutes of music but this allows it to be little more punchy in it’s quick fire pop/soul imagination.

Kicking off the album is “Pleasure” which features the trademark 80’s British sound of the Saxophone. The other instrumentation on this track sounds a little in the background with the drums and bass needing turning up just a little. It’s a pleasant track but fades into the background in comparison to some of the other songs.

One of those songs is “Communication” which is perhaps my favourite on the entire album. This is a fun and jumpy pop number where Hadley sounds superb. I don’t believe any other singer could have delivered this track in the way he does and I would go as far to say that Tony Hadley has one of the most distinctive voices in all of popular music.

“Code Of Love” is a more low key affair but features that familiar Spandau Ballet sound in a more sultry type of track.

“Gold” is obviously one of those massive hits I mentioned earlier and I doubt there is anyone reading this who has never heard this song. It’s an 80’s pop standard that is played time and time again even today. What it is all about still escapes me a little especially when you watch the music video which makes it seem even more confusing.

But the melody and the vocal delivery is just awesome and it’s a fun and brilliant pop song. If you really hate “Gold” then I presume you have either heard it too many times or just have no pop music sensibility and are a little bit joyless.

“Lifeline” sees the band go for a more stadium rock anthem sound but it’s so saccharine that it misses it’s intended purpose. It’s another sing along track that is perfectly at home in the new wave 80’s aesthetic but is just the wrong side of “cheesy” for this listener.

“Heaven Is A Secret” is nice. But that is the problem – it’s so nice and sweet. It’s almost sounds like something out of a Broadway show and whilst it all is put together nicely and sounds slick it just makes me feel a bit nauseous.

The best is saved for last as the title track “True” finishes things off and it sounds nothing like any other track on the entire project.

The most famous of all the Spandau Ballet hits this is a slow jam that has a guitar riff that is instantly recognizable.

I won’t deny that I know every lyric of this song and even though the lyrics (like so many 80’s songs) are a little nonsensical this is an epic 80’s song and will be featured on “the best of” that decade for many years to come.

There is nothing wrong with this album but you can’t help thinking that it was all about the couple of big tracks with some filler stuffed around it to make an album. There isn’t a real direction that the album pulls in other than things we have heard before and it just all fades into the background until you get to the big hits.

I like “Communication” and “Lifeline” is passable but nothing else comes close to “Gold” and “True” and I don’t think it was ever meant to.