Posted on December 8, 2017 by Xtal Posted in Uncategorized

A lot had changed in pop music in those 5 years and this was the album which for me signaled the end of the hit making days for the band.

The decline in the success Jamiroquai would have is a usual development in the life of most bands especially one that saw such a change in personnel leaving only one member (Jay Kay) from the original line up in 1993. The band started out as a socially conscious Jazz Funk musical group that eventually turned into radio friendly pop music, dance, electronic whilst still trying to retain a brand of Funk that Jamiroquai would become known for.

Having had a mixed reception to the previous album Dynamite (2005) a change of direction musically was offered up on this 7th outing with a more live music element in the sound being apparent and use of a brass section returning.

The brass element was not like that of Emergency On Planet Earth (1993) and featured a more intricate Jazz sound to a number of the tracks whilst trying to play off the dancier electronic sound that Jamiroquai had been hitting over the previous couple of albums.

Lyrically Kay is again the only songwriter and at times he is lost for ideas which can lead to some confusing and nonsensical wording. 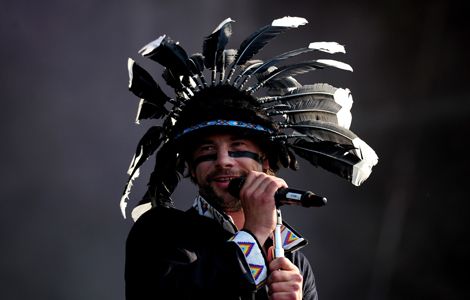 The title track “Rock Dust Light Star” in itself is bizarre but the melody and vocals make it compelling and I really enjoy this song. Kay is looking at the world in quite a desolate manner (as he has on a number of other tracks in the past) and attempts to put how small we are in perspective.

It is a low key opener to the album but an enjoyable track regardless.

“White Knuckle Ride” was the first track I had heard before this albums release. I remember loving this song the moment I heard it as it had everything I love about Jamiroquai within it. Funky with a soulful tone as the use of the backing vocals were big and bold.

The song is catchy with it’s easy to remember chorus but its the bassline that is the real winner as Paul Turner really lays it down. Kay sounds as good as he ever did and I really think this song is superb.

“Smoke and Mirrors” takes a few risks musically and incorporates a Jazzier element to it’s structure. This song in quite intricate and one that whilst I don’t dislike I find a little too over thought and clunky. It strikes me as a song they just kept adding layer and layer too with different instrumental moments that make it all a bit too bloated.

“All Good In The Hood” goes the other way with a standard pounding bassline and uplifting verses. This is as Jamiroquai sounding as you are likely to get but loses it’s steam after the first verse and chorus. The tone of the track doesn’t capture the imagination as much as “White Knuckle Ride” and serves as filler.

One of the strangest songs on the album is “Hurtin”. It is strange because it’s clearly a deliberate change in direction that may have been there to serve as some diversity but just seems out of place to me. This is a Rock Funk bluesy concoction that sounded like it started as a jam in the studio and emerged further. The guitar work is sharp and the production is smooth but the put on rasp that Kay puts on to give it some sort of American Rock sound just doesn’t work for me. As a fan of the Funk Soul side to Jamiroquai this just isn’t my thing.

The sixth track “Blue Skies” is a wonderful song which really grew on me as I continued to listen to this album. It’s simple in it’s melody and overall production but as a long time Jamiroquai fan this song really resonates with the whole thing because as Kay has always been the lyric writer most of the words are coming from his personal experiences and there is something about this song that felt like the end of a journey.

The song is honest and he recognizes his faults in the past but ahead there is nothing but blue skies. A little too cheesy? Maybe, but for me this is one of the best songs Kay had wrote since 1996’s Travelling Without Moving.

“Lifeline” has always been a song that confused me. Again it’s a song with too many elements that make it feel longer than it is. What is odd listening to it now in 2017 is how much the song has dated. It’s fun no doubt but there is such a bloated nature to the whole thing that I feel like I don’t know what sort of mood to be in during certain elements of the song. It just sounds a little disjointed.

Without a doubt the best song on the album is track 8 “She’s A Fast Persuader”. God I love this song. This has everything I wanted in a Jamiroquai song with it’s looping funky guitar rift and prominent drumming patterns. The tone is dark and sounds like something coming from outer space which is exactly what you would expect from an album called “Rock Dust Light Star”.

In the last portion of the song it breaks down into this Jazz Funk jam which just showcases some brilliant musicianship and that the band whilst very different to 1993 still retains the essence of what it was all about.

One of the more underrated songs on the set is “Two Completely Different Things”. I initially dismissed this as a knock of “It Ain’t Over Till It’s Over” from Lenny Kravitz but listening further this is a very solid track where all the elements sound more cohesive than some of the songs we have heard so far. Kay sounds very comfortable on this light and breezy piece. A 90’s pop/soul glaze is clear but as I always liked that sound it works well for my ears.

“Goodbye To My Dancer” never did grow on me. It misses the mark it thinks it is hitting. I think the song thought it was going to be able to capture a moment of loss and moving forward without someone but the lyrics and delivery don’t convince me. I find this song quite difficult to listen to because it just isn’t very good and that is putting it mildly.

“Never Gonna Be Another” is better from an instrumentation point of view and sounds similar to the track “Everyday” from “Travelling Without Moving”. Kay sounds as good as every vocally but the song has a chorus that just doesn’t work for me. The lyric on that chorus is just not strong enough which is shame as the verses work.

The final track on “Rock Dust Light Star” is the delightful “Hey Floyd”. This is a little over the top in all it’s different key changes, style switches and length but at least this song keeps you engaged. Kay uses this character Floyd as a way to talk about someone who is addicted to drugs.

After a low key opening section the song bursts into life with a upbeat pre chorus and then chorus. What takes you by surprise is the drop into a reggae beat as the song completely changes. It’s such a superb song and I was lucky to see Jamiroquai perform this live in December 2017 which came as a shock to me as I would never have expected such a song (just an album track) to be done.

This is a real high point to end on and an example of how Jamiroquai can make exciting music.

I much preferred this album to the previous effort “Dynamite” but it just suffer from trying to do too much on certain tracks when less would have been more.